Interagency Special Team, “94 Soldiers who Died in Battle or on Duty after the Korean War Found_"

Interagency Special Team,
“94 Soldiers who Died in Battle or on Duty after the Korean War Found Their Families”

- ACRC-MND(ROKA)-MPVA special team was launched in December 2021 to find bereaved families of 2,048 war dead and dead on duty-

In 70 years, 94 soldiers who died in combat or on duty during the Korean War have found their family. The deceased soldiers, according to their family’s wishes, will be honored as veterans by such as enshrining the memorial tablets of them in the National Cemetery.

In December last year, the ACRC, the MND, and the MPVA signed an MOU and launched a Special Team to Find Families of War Dead and Dead on Duty(hereinafter the Special Team).

The Special Team is tasked with tracing bereaved families of the 2,048 soldiers who were recognized as war dead or dead on duty by the ROKA’s re-examination between 1996 and 1997. The recognition was, however, not informed to the soldiers’ families due to invalid address and other reasons.

The Special Team has carried out multifaceted efforts to find the bereaved families by such as disclosing the soldiers’ names, providing telephone consultations, looking up the soldiers’ family relation register aided by the local governments, and checking MPVA . As a result of such efforts, the team selected 135 soldiers out of 1,622 soldiers who died in battle or on duty, and through final verification, the team found the bereaved families of 94 of them.

The team will inform the bereaved families of the fact through talks and other forms and will support them in enshrinement of the memorial tablets of the deceased soldiers and relocation of their burial site. For war dead and dead on duty whose immediate family has not been found, the MPVA will proceed with the registration process ex officio.

The Special Team said, “As more than 70 years have passed since the Korean War, finding more families of the deceased soldiers requires citizens’ active interest and engagement.”

The names of the 2,048 war dead and dead on duty are posted on the web-sites of the ACRC, e-People, and the MND. Anyone who wants to make an inquiry or provides information on the soldiers’ families, relatives, or acquaintances can make a call to the Special Team.

ACRC Chairperson Jeon Hyun-Heui said, “It is the government’s firm resolve to remember those who have made sacrifices for the country until the end, no matter how much time has passed“

She added, “The ACRC and the Special Team, to practice proactive governance, will work hard to find even one more bereaved family, and in this regard, citizens’ interest and participation will be a great help.”

Minister Suh Wook of the MND said, “To fulfill our mission of taking care of all the soldiers who died fighting for our country, the ROK Army will actively support the special team’s activities and onsite visits”

Minister Hwang Ki-Choul of the MPVA said, “We will do our best to honor and support the soldiers who found their relatives as soon as possible through expeditious examination of registration of Persons of Distinguished Service to the Sate and their burial at the National Cemetery.

He also added, “As for soldiers whose relatives have not been identified, the MPVA will register and manage them according to the ex officio procedure under the Act on the Honorable Treatment of and Support for Persons of Distinguished Service to the State” 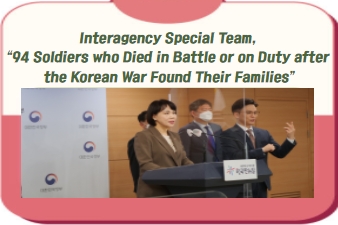