ACRC delegation paid an official visit to have in-person meetings with experts of the Economist Intelligence Unit in London, UK and the Bertelsmann Stiftung in Gütersloh, Germany to introduce Korea's best anti-corruption policy institutions

Anti-Corruption and Civil Rights Commission (ACRC, Chairperson Jeon Hyun-Heui) delegation paid an official visit to the Economist Intelligence Unit in London, UK and Bertelsmann Stiftung in Gütersloh, Germany, which are international assessment organizations providing source data for the Corruption Perceptions Index issued by Transparency International and actively promoted the achievements of the Korean government's anti-corruption policies such as the implementation of the Act on the Prevention of Conflict of Interest Related to Duties of Public Servants.

From May 24th to 25th, ACRC had practitioner-level meetings with experts of the EIU headquartered in London, UK and the Bertelsmann Stiftung (BF) based in Germany to improve its national integrity level that matches its status in the international community.

Corruption Perceptions Index (CPI) published since 1995 by the Transparency International assesses the level of corruption in the public and political sector in 180 countries every year.

The Index is derived from multiple individual source data related to perceptions of corruption in the public and political sector provided by international assessment organizations* that analyze national competitiveness and business investment environment, etc.

In 2021 CPI issued by the Transparency International (TI), Korea was ranked 32nd out of 180 countries covered, scoring 62 points out of the perfect score of 100, which is an all-time high.

Economist Intelligence Unit is a renowned intelligence that provides analysis on economic and political developments in countries around the world, and the Bertelsmann Stiftung is a non-profit research institution that conducts social science research on themes such as democracy, etc.

The EIU Country Risk Service and the Bertelsmann Transformation Index and Sustainable Governance Indicators are the most highly recognized among the 13 source indicators that construct the Corruption Perceptions Index.

During the meetings, ACRC delegation explained Korea’s anti-corruption policy initiatives and institutions that have been recently introduced, including the promulgation of the Act on the Prevention of Conflict of Interest related to Duties of Public Servants and implementation of the Act on the Prohibition of False Claims for Public Fund and Recovery of Illicit Profits, and delivered relevant materials.

The EIU experts said, “the Country Risk Service provides countries with data based on its comprehensive assessment of the impact of corruption on the economy and civil society to induce the society, people and government to make concerted efforts. Korea is a country overcoming setbacks caused by corruption scandals through future-oriented anti-corruption policy institutions.”

The Bertelsmann senior experts said, “While a lot of countries usually go through progress and regression back and forth, Korea has been moving forward continuously with its constant anti-corruption policy efforts since 2017.”

ACRC Anti-Corruption Bureau General Director Han Sam-Seok said, “In order for Korea to take a leap forward as a nation with the level of integrity on a par with that of advanced countries, ACRC will continue to push for consistent anti-corruption and integrity policies so that Korea can join the top 20s in the global ranking in the CPI.” 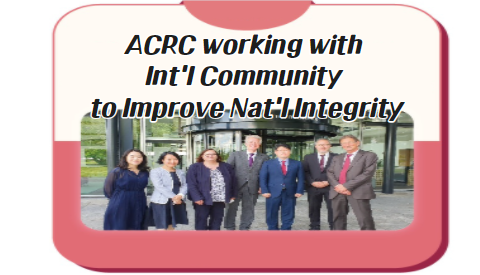