In particular, on top of ranking 1st in Public Participation and 3rd in Budget Oversight in the OBS 2021,Korea had a score of74 points, ranking 11th in Transparency (Open Budget Index), up 12 points and 18 places, which is a remarkable improvement after ranking 29th among 117 countries with a score of 62 in Transparency in the OBS 2019. In transparency partwhich is classified into five levels, Korea was at the secondhighest level, classified as a country providing substantial level of budget information.

The Open Budget Survey measures the extent to which public access to central government budget information is available.

Established in 1997, International Budget Partnership is a non-governmental organization conducting independent, comparative and fact-based research in collaboration with academic and civil society, and it has offices in Washington D.C., USA, New Zealand, South Africa, and Kenya. IBP has published OBS, which uses internationally accepted criteria to assess public access to central government budget information; formal opportunities for the public to participate in the national budget process; and the role of budget oversight institutions such as the legislature and auditor in the budget process, biennially since 2006

The OBS 2021 finds that Korea continues to stand out for implementing participatory budgeting at the central government level. An important aspect of this mechanism is the Citizen Committee … The meetings of the Citizen Committee give the public, civil society and government officials the opportunity to work together and build consensus around ideas. … Korea is at the forefront of efforts to expand the openness and use of public data.”

The Director General of the Anti-Corruption Bureau of the ACRC Han Sam-Seok said, “We can be closer to our goal of being on a par with advanced nations in terms of integrity if anti-corruption system works effectively based on mutual cooperation between the government and the people in preventing the budget from being used for purposes other than those for which it is intended, etc. through operating more transparent budget system and offering formal opportunities to the public to participate in the budget process.” 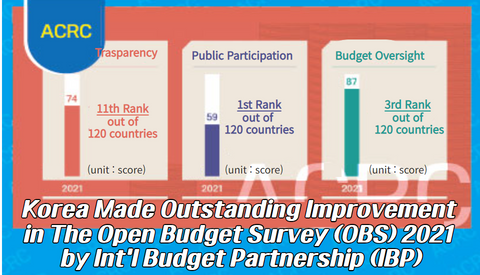